Parents Stuart and Carol Gosling have funded five new breast pumps and bottles for children born with cleft lip and palate thanks to generous donations including another £2,000 from the Friends at Broomfield.

A cleft is a gap or split in the upper lip and/or the roof of the mouth as a result of a baby’s face not joining together in the womb. It affects one in 700 babies born in the UK and makes it difficult for the child to feed from either the breast or a conventional bottle because they are unable to form a vacuum inside their mouths.

Carol and Stuart’s son Oliver was born with cleft lip and palate in 2015 and has had two reconstructive operations.

Over £14,000 has now been raised for the hospital’s cleft department. The Friends’ latest donation is in addition to the £6,000 they have contributed previously, and there has also been a substantial sum from an anonymous donor, and money raised by two charity football matches and table-top sales in the atrium. 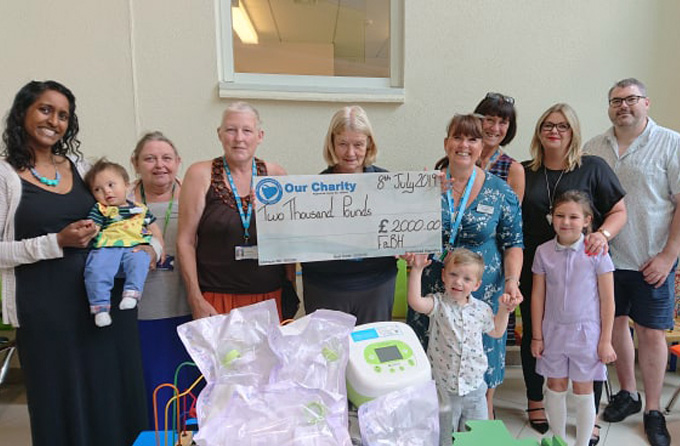 Peri Codling, clinical nurse specialist for cleft lip and palate, said: “These pumps are so beneficial. It means mums will be able to express their milk and give their babies the specialised bottle so they get the best breast milk.

“We’ve doubled our quantity of breast pumps and we are able to offer more mums and babies that want to breastfeed the opportunity.”

Carol Gosling said: “When Oliver was born, I was unable to express to breastfeed but I felt it was really important for him to have breast milk. We were kindly lent a breast pump but at the time there were only a limited number available. As we knew there was a shortage, we wanted to give something back for the care we’ve had for Oliver.

“We also want to raise awareness as not many people realise the feeding complications that babies born with cleft palates have. They think it’s just a couple of operations and it’s done.”

Dad Stuart added: “The help from Broomfield cleft team has been amazing – second to none.”

Mum Tanuja Wimslow, whose son was also born with cleft lip and palate, has been one of the parents to benefit from the Gosling’s fundraising: “When my milk came in I was able to use the breast pumps in hospital and establish feeding with him confidently using the specialist bottles. By giving him breast milk, I felt I was doing as much as I could do to give him immunity when he was having operations.”