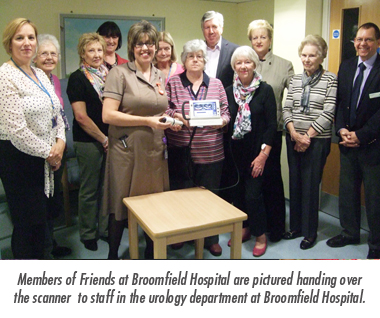 The Friends contribute £3,558 towards much needed Bladder Scanner

The Friends contribute £3,558 towards much needed Bladder Scanner.

The group, formerly called the League of Friends, have officially handed over a Cubescan 700 bladder scanner for the department, for use in the outpatient clinic and on the wards.

The Friends have contributed £3,558 towards the new touch-screen colour hand-held scanner, which is more than half the equipment’s total cost of £6,000.

Alison Douglas, chairman of Friends at Broomfield Hospital said: “Scans can now be done in the outpatient clinic on the same day and, as the scanner is so light and portable, it can easily be moved around the ward and operated at the bedside, wherever it’s needed most urgently.”

“This means the medical team can not only make a correct diagnosis early, but can also be confident to reassure and discuss appropriate treatment with patients. It also frees up the radiography department and allows them to concentrate of providing more involved scans that may be required. The scanner is our latest donation of specialist equipment to the hospital and we are delighted that it will help improve the service for urology patients.” 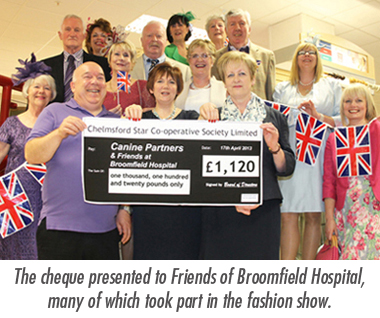 A “Go British” event which included a fabulous fashion show at Chelmsford Star Co-op’s Quadrant store in Chelmsford has resulted in a £560 donation for Friends at Broomfield Hospital.

The special evening attracted more than 100 people and the highlight was the fashion show, featuring outfits for all occasions for men and women, modelled by Friends at Broomfield Hospital volunteers and supporters.

The emphasis was on British goods and products and as well as being able to look around the store and take advantage of discounts on a wide range of items, people who came along on the night enjoyed glasses of wine, cookery demonstrations and tastings, including delicious Rossi ice cream. A well-supported raffle gave a boost to funds raised.

Proceeds from the event were divided between Friends at Broomfield Hospital and another charity, Canine Partners.